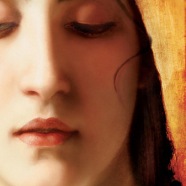 Best selling author Sarah Dunant read “Sacred Hearts” to its soundtrack, as part of the East Cork Early Music Festival at Cobh’s St. Coleman’s Cathedral on Sunday 19th Sept. Yes, that’s right, a book that comes with a score. Dunant thinks it is the first time that music has been composed specifically for novel.

“Sacred Hearts”, short-listed for the Walter Scott Prize, gives vent to a howling young woman, walled up in a nunnery against her will by her father, in the renaissance city of Ferrara. The fallout threatens to wreak the harmony of the angelic choir, whose vestal songsters engorge the convent with prestige, power and riches through their performances.

To write about characters whose lives were shaped by music, Dunant recruited the help of Musica Secreta, a group of musicologists and singers who strive to bring to life the music of early modern women. They discovered that the novel helped them better re-imagine convents where nuns sung this music.The group then scripted a soundscape for the novel.

Sarah Dunant, and the singers of Musica Secreta garbed as nuns, fused words and music to recreate a rich experience of the characters, set in St. Colman’s Cathedral in Cobh. It was a surreal experience. I had read the novel, so in one sense it came to life. The singers dressed as nuns helped, but they didn’t move like nuns. They lacked that certain stiffness, their bodies were too fluid as they progressed up and down the aisles. But they aced the singing, and as I concentrated on their voices, the bright sunlight of Ferrara pealed out, and lit up the dark interior of St. Coleman’s

This site uses Akismet to reduce spam. Learn how your comment data is processed.